Because of advances in technology and the types of materials used to manufacture rubber multi-ply conveyor belting there is often confusion concerning belt edge types.

This information bulletin is designed to provide up-to-date guidance and clarification. There are basically three types of edges available: moulded edge, (cut and) sealed edge and (plain) cut edge.

Many years ago, moulded edges were the norm because cotton was used as the reinforcing fabric in multi-ply belts.

A moulded edge was necessary in order to prevent moisture penetrating the cotton fabric and causing it to rot.

However, since the inception of synthetic ply belt carcasses using polyester and polyamide, this problem effectively no longer exists. As a consequence, belts without moulded edges are now the most commonly used.

Moulded edges can only be created when a belt is manufactured (assembled and vulcanised) to an exact width, usually a specific width required by the end-user. A small strip of non-reinforced rubber is attached to the side of the carcass during the calendaring of the belt. The strip is formed as an integral part of the belt during the vulcanizing process. This typically provides 5 to 15 mm of rubber on the belt edge without fabric reinforcement.

Moulded edges do not provide any structural advantage and can be susceptible to damage if the belt wanders off-track.

Non-reinforced rubber can easily be cut off so when a belt with moulded edges gets damaged, large pieces of rubber are often torn off.

Most ‘non-stock’ belting in special grades (fire resistant for example) and/or non-standard sizes are made to order at the specific width requested by the customer. These will therefore naturally have moulded edges unless the widths and length combinations requested by the customer allow belts to be slit (cut) from a wider, more cost-efficient production width.

To maximise efficiency of production, standard productionbelts are usually made as wide as the production machinerywill allow and are then subsequently cut to narrower widths.At Dunlop we automatically create belts with sealed edgesusing a special cutting process involving cutting knives thatrotate at very high speed. The heat created by the friction ofthe rotating knives melts the carcass fibres and the rubberon the edge of the belt, effectively creating a seal. This isreferred to as a ‘cut & sealed edge’ or simply ‘sealed edge’.Apart from a better visual aspect, the sealed edge means thatthe belt is not sensitive to moisture penetration and cantherefore be used in wet conditions and is better suited tolonger-term storage outdoors.

Belts with cut edges are produced in the same way asdescribed previously but are cut (slit) using conventionalrotating knives. A ‘cut edge’ is therefore not sealed.At Dunlop we do not recommend the use of unsealed (raw)cut belt edges as wet conditions and outdoor storageconditions can cause water to enter the carcass from theedge due to capillary forces. Although the carcass fibres arehardly affected, moisture can cause vulcanising problemswhen making splice joints.

All steelcord belts are manufactured to a specific set ofspecifications which fully embed the steel cords and aretherefore only available with moulded edges. In the caseof steelcord and steel reinforced fabric ply beltingit is necessary to use moulded edges in order to preventmoisture from causing the steel to corrode over time.

The effects of exposure to ozone

Ozone occurs naturally in the upper atmosphere. At high altitude, it acts as a protective shield by absorbing harmful ultraviolet rays. However, at low altitude, the ozone itself becomes a pollutant. Exposure to ozone increases the acidity of carbon black surfaces and causes reactions to take place within the molecular structure of the rubber. This has several consequences such as a surface cracking and a decrease in the tensile strength of the rubber. The actual level of ozone concentrations at ground level, and therefore the level of 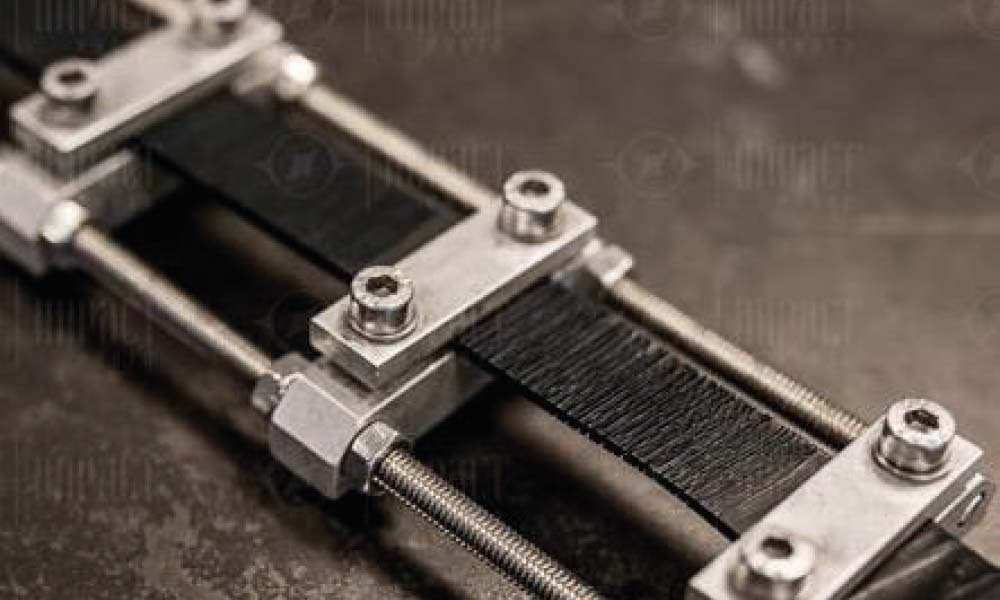 Belts that do not operate under shelter are especially prone to surface cracking, which can be extremely detrimental in terms of the performance of the belt and its working life.

Even more significant are the environmental and health and safety consequences of the damage caused by ozone exposure because dust particles from the materials being conveyed penetrate the surface cracks and are then discharged (shaken out) on the return (underside) run of the belt.

At first glance, fine cracks in the surface rubber may not seem to be a major problem but over a period the rubber becomes increasingly brittle. Transversal cracks deepen under the repeated stress of passing over the pulleys and drums and, if the conveyor has a relatively short transition distance, longitudinal cracks can also begin to appear.

Again, surface cracking may not initially seem to be a cause of concern but there are often hidden long-term effects.

down to the carcass of the belt. If the belt is carrying product such as household waste, grain, wood/waste or biomass then the oils and resins that penetrate through to the carcass will cause the belt to swell and distort very badly. 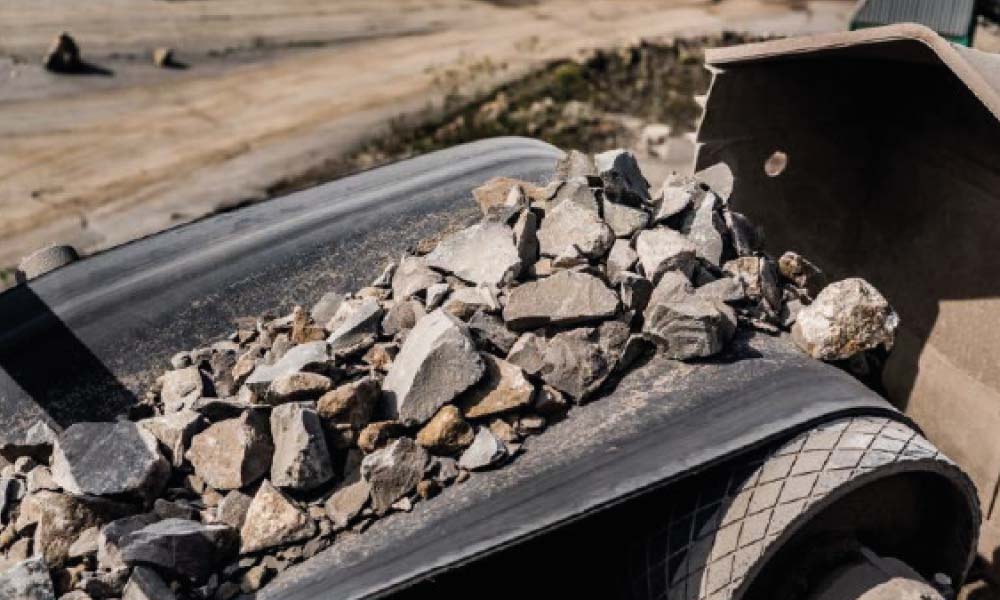 The effects of ultra violet radiation

Ultraviolet radiation causes chemical reactions to take place within rubber and the rapid decline in the ozone layer in the upper atmosphere over the past several decades is allowing an increasing level of UV radiation to reach the earth’s surface. Ultraviolet light from sunlight and fluorescent lighting accelerates deterioration because it produces photochemical reactions that promote the oxidation of the surface of the rubber resulting in a loss in mechanical strength.

To scientifically measure resistance to ozone, samples are placed under tension (20% elongation) inside the ozone testing cabinet and exposed to highly concentrated levels of ozone for a period up to 96 hours. At Dunlop the pass criteria is that the rubber sample does not show any signs of cracking after 96 hours (@ 20°C, 50 pphm and 20% strain) inside the ozone cabinet. Every sample is closely examined for evidence of cracking at two-hourly intervals and the results carefully measured and recorded. As a general rule, based on experience, failure to exceed more than 8 hours under test without surface cracking will most certainly mean that the belt will start to deteriorate in less than 2 years. In many cases, particularly in coastal locations, deterioration will begin within a matter of months.

At Dunlop Conveyor Belting we were amongst the very first to introduce mandatory testing to EN/ISO 1431 international standards. As a direct result, special anti-oxidant additives that act as highly efficient anti-ozonants were introduced into all of our rubber compound recipes to provide protection against the damaging effects of ozone and ultra violet.

As often as not, the quality of a belt (including its ability to resist wear) is reflected in its price. It is always worth the effort to check the original manufacturers specifications very carefully and ask for documented evidence of tested performance compared to the relevant international standard before placing your order. 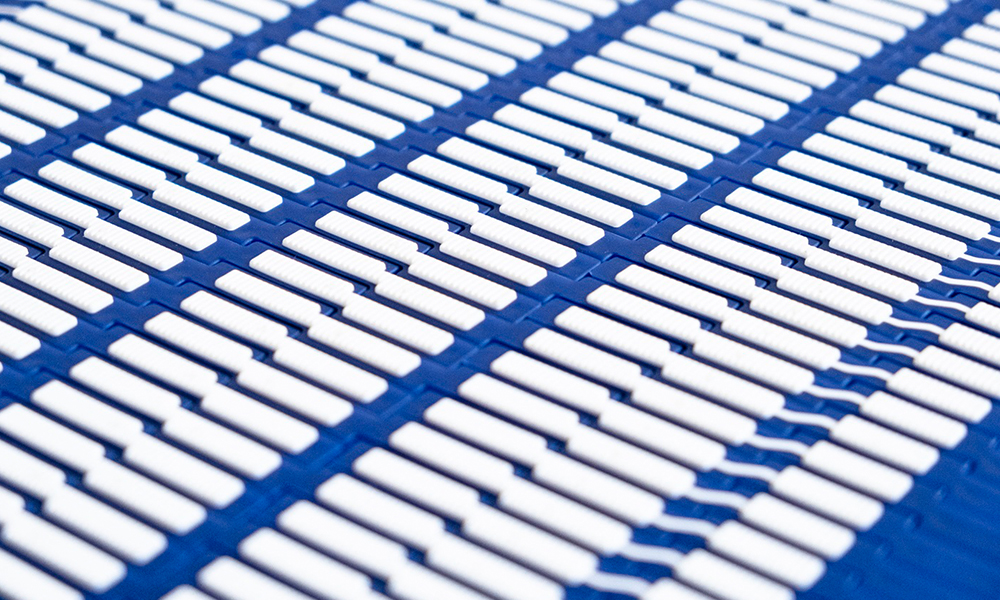 Two new modular belt solutions from Habasit bring new possibilities for industrial packaging applications, especially in applications where space is at a premium. The HabasitLINK M2592 raised deck radius belt saves up to 5 times the space needed for a traditional radius conveyor. The HabasitLINK M0870 HighGrip Micropitch delivers 50 per cent lower minimum transfer distance, enabling use of grip top plastic belts on nosebar applications with a knife edge down to 6 mm.

Conveyors for use in the packaging industry face several challenges including limited floor space for machines, meaning belts must operate in tight spaces and at tight angles. It is crucial that conveyors are optimised for the space, so they don’t harm production layout. Furthermore, the relatively large transfers achievable with traditional grip top modular belts led to many customers being unable to take advantage of modular belts. The two new products from Habasit help to overcome these limitations.

“Plastic modular belts with a grip top feature are ideally suited for incline and decline solutions. However, until now they were unavailable for tight transfer conveyors,” explained Anders Nilsson, R&D portfolio manager for HabasitLINK. “The new M0870 HighGrip Micropitch 0.3” provides reliable product positioning with no slippage and transfers as narrow as 23 mm, a 50 per cent reduction compared to other grip-top modular belts.

“With its high grip surface, this micropitch belt also allows for higher operating speeds in some applications because of the reduced product slippage on the belt. It also copes better than traditional modular belts in incline and decline applications.”

The second novelty by Habasit is the M2592 Radius Raised Deck 1”, which allows to optimize line layout and reduce the conveyor system footprint.

“We understand that, for many businesses, space is at a premium and this has caused problems in finding suitable plastic modular belts for packaging applications,” continued Nilsson. “The M2592 space saver belt allows customers to save up to five times the floor space compared to alternative solutions. This permits increased flexibility in terms of plant and production layout.

“Furthermore, thanks to the raised deck surface, customers can transport products with a wide range of sizes, from small boxes to wide pans, without interference from lateral wearstrips. This is in addition to the fact that it is one of the most robust belts available for radius applications, enabling longer conveyors and less drives and delivering an overall lower cost.

“Finally, it is worth noting that plastic belts emit less noise when transporting crates and pans compared to using rollers or chains. This facilitates a better working environment while also helping to protect the pans and crates being transferred from damage,” concluded Nilsson.

2 for the price of 1 – Measuring and switching 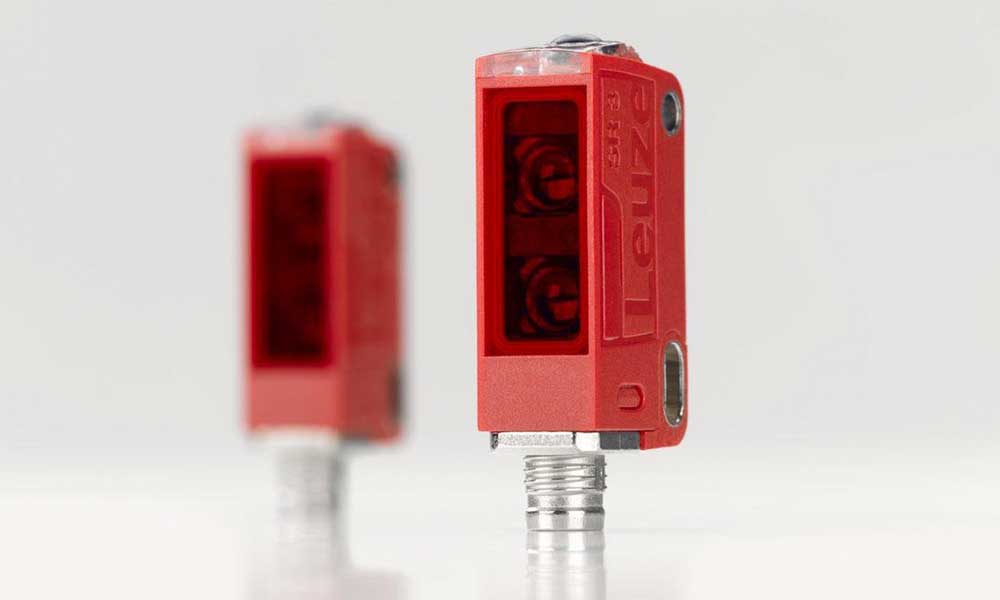 The innovative ODT 3C sensor from Leuze can handle both measuring and switching tasks. The new 2-in-1 solution is thus suitable for a wide range of automated industrial applications.

Is there an object on the conveyor belt? If yes: What is its position or distance to the machine? These are typical issues that need to be addressed in a wide range of industrial applications and processes. In the past, to solve this problem required the use of multiple sensors. With the new ODT 3C from Leuze, only a single device is needed: The innovative sensor can transmit both switching and measuring information to the machine control system, which makes it an efficient and economical 2-in-1 solution. 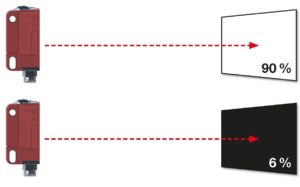 The operating range of the ODT 3C can be set numerically via IO-Link, and also very accurately thanks to device calibration and nearly reflection-independent from a distance (remote)

Flexibility with a single sensor

The ODT 3C transmits measurement values and extensive diagnostic data via IO-Link. The data includes temperature values, warnings, and signal quality. It features impressive black-and-white behavior (< ± 3 millimeter at 150 millimeter). The operating range can be easily adjusted via the teach button, remote signal or IO-Link. The new Leuze sensor also offers impressive functional reliability: Active ambient light suppression prevents faulty switching, even when exposed to direct light from LED building lighting systems. LEDs that are easily visible from all sides allow you to quickly read the status of the ODT 3C. Two independent switching outputs and sensor models with warning output or a small light spot (pinpoint) round of the sensor’s functions. This enables plant operators to use the ODT 3C flexibly in a wide range of applications. 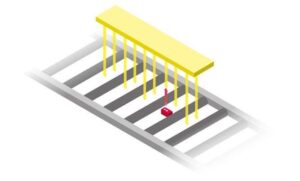 Thanks to ambient light suppression, the ODT 3C sensor from Leuze is not affected by direct light from LED hall lighting – this prevents incorrect switching and increases the functional reliability of the sensor 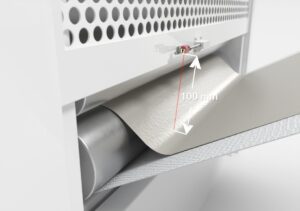 Application example from the food industry: A machine is rolling off dough for baked goods. The ODT 3C sensor is pointing down onto the dough. It sends a distance value to the parent control. The goal is to regulate the dough within an optimal distance range of 100–120 mm. If the sensor detects a measurement value outside the target range, the conveyor belt motors adjust the speed of the conveyor accordingly. The measurement value is evaluated in the process data via IO-Link. In addition, diagnostic data is transmitted to the controller via IO-Link for Industry 4.0 purposes.