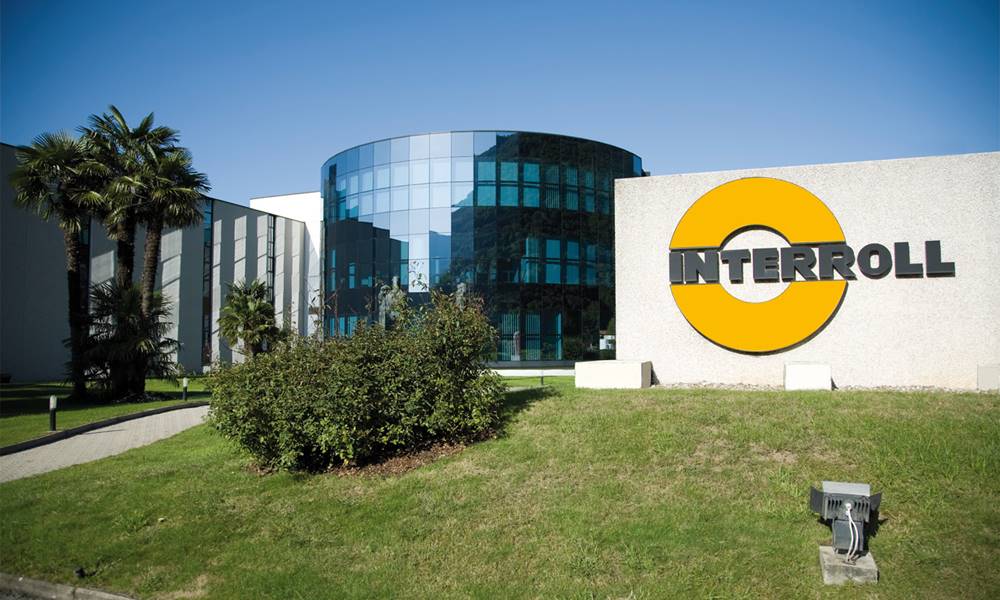 “In the first half of 2021, Interroll recorded record growth in order intake, EBIT and profit,” says Ingo Steinkrüger, Chief Executive Officer of Interroll Worldwide Group. “In addition to investments in technology platforms and capacities, our high cost and investment discipline also contributed to this positive result.”

At CHF 63.9 million, consolidated sales in the “Rollers” product groupwere +21.7% higher than in the previous year. All regions contributed to the growth. In terms of incoming orders, the product group recorded a strong recovery of +47.2% to CHF 79.7 million (previous-year period: CHF 54.2 million). This excellent performance was driven by highly efficient manufacturing processes and the high quality of Interroll products. However, Interroll also proactively anticipated and exploited the potential of market trends, such as the continued strong development of e-commerce and user investments in modernization and outsourcing to third-party logistics (3PL) providers.

Consolidated sales of the “Drives” Product Groupamounted to CHF 93.2 million in the first half of 2021, up +17.8% on the previous-year period (CHF 79.1 million). Thanks to innovative products such as the EC5000 RollerDrive, which is successful in the market, consolidated order intake rose to CHF 119.6 million compared with CHF 77.4 million in the prior-year period.

The “Conveyors & Sorters” product grouprecorded consolidated sales of CHF 88.1 million in the first half of 2021, 8.9% higher than in the same period of the previous year (CHF 80.9 million). Order intake rose significantly to CHF 186.6 million, an increase of 67.4% compared to the previous year period with CHF 111.4 million.

At the end of the first half of 2021, Interroll generated consolidated revenue of CHF 26.9 million with the “Pallet Handling” product group, up 30.6% on the same period of the previous year (CHF 20.6 million). Consolidated order intake increased by 74.7% to CHF 35.7 million (previous year: CHF 20.4 million).

At the end of the first half, the regions accounted for 60% of total sales in Europe, Middle East, and Africa (EMEA), 27% in the Americas, and 13% in Asia-Pacific.

Sales in the Americas regionamounted to CHF 74.5 million, 17.4% higher than in the previous year (CHF 63.5 million). With growth of 95.8% in order intake to CHF 151.3 million (previous year: CHF 77.3 million), a very strong dynamic was noticeable. New orders for sorters doubled, which also include orders for the new High-Performance Crossbelt Sorter (HPCS) and two major projects.

Due to a high order backlog, the company has a positive outlook, but at the same time the situation on the raw material markets and for precursors such as semiconductors remains very tense. The company thus remains cautiously optimistic overall for the rest of the year.

ORBIS® Corporation, an international leader in reusable packaging, adds the improved StakPak Plus™ container to its suite of offerings for industrial and automotive applications. The StakPak Plus takes traditional StakPak containers and adds various collar sizes to increase a container’s height to accommodate unique-shaped parts commonly found in the automotive supply chain.

The StakPak Plus takes all the best attributes of the traditional StakPak container, including reusability and cost savings, and combines them with customized heights to increase container capacity.

“For more than 20 years, the StakPak container has helped automotive and industrial companies protect parts and optimize line-side assembly operations,” said Dylan Wilcox, product manager at ORBIS Corporation. “The StakPak Plus builds on that history in offering our customers a lightweight, sustainable and reusable solution that meets their supply chain’s evolving needs while reducing lead times associated with a custom tote.

Available in popular 32” x 15” and 24” x 15” footprints, StakPak Plus totes feature a permanent collar that adds height and internal volume. All StakPak Plus totes are fully compatible with existing totes in the industry. As with all StakPak totes, ORBIShield® foam, fabric and rigid dunnage can be designed for StakPak Plus containers to provide better pack density and part presentation.

Since the introduction of the StakPak container, it has evolved into an entire family of straight-wall modular containers designed for just-in-time applications for parts shipping, storage, work-in-process and line-side assembly operations. In fact, StakPak containers have traveled 25 billion trips in supply chains over the years. Like all ORBIS reusable packaging solutions, the StakPak Plus collar can be recovered, recycled and reprocessed right back into supply chain packaging. 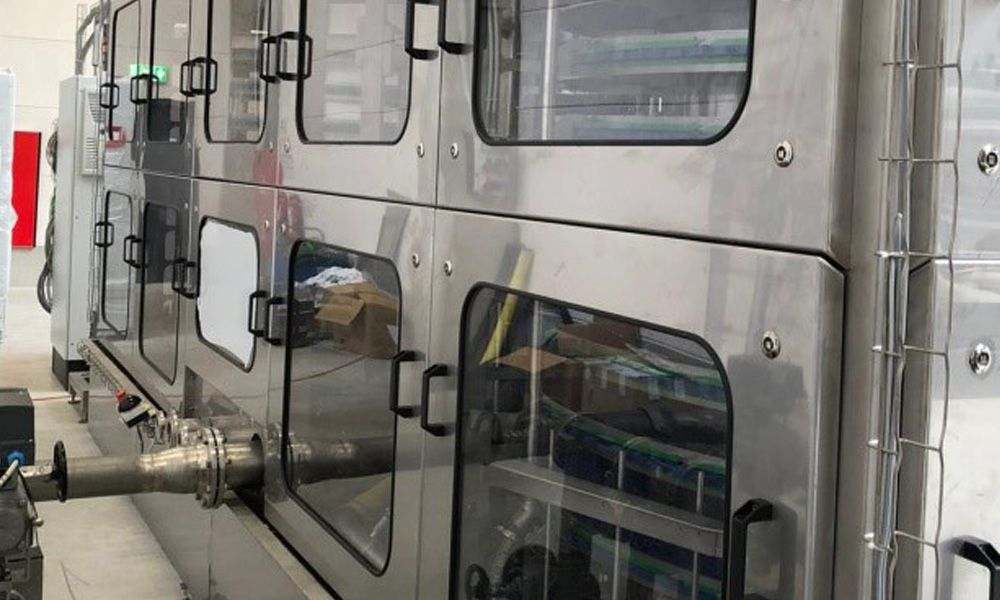 Continuously Operating Spiral System has always been corresponded with demand in which the products should be sprinkled with cold water and thus cooled faster. Finally, based on our proven COSS with circulating air cooling, we have realized a machine with water cooling. During the construction were not only the hygienic requirements taken into account. Only corrosion-free materials were also used. The drive technology is located outside the enclosure and the sensors are equipped with the highest possible protection.

The double towered COSS stands in a 4 m³ collecting tank. From this reservoir the cooling water is sucked in with a pump, filtered and cooled by a plate heat exchanger. A float switch provides the right amount of water. Via the internal piping the volume flow is evenly distributed in the system over approximated 350 nozzles. During the run the hot products are sprayed with cold water through the nozzles arranged parallel to the chain course.

The enclosure of the machine ensures that no splash water or spray mist penetrates to the outside. It is designed by the combination of VA-sheet and macrolon in such a way that you can look well into the inside of the cooler from the outside.

The number and arrangement of the individual door segments is chosen in such a way that a intervention on all sides of the system is without any tool  possible.

After the wet cooling process the product is dried on the system mat chain by an Airknife. The residual water runs back into circulation. 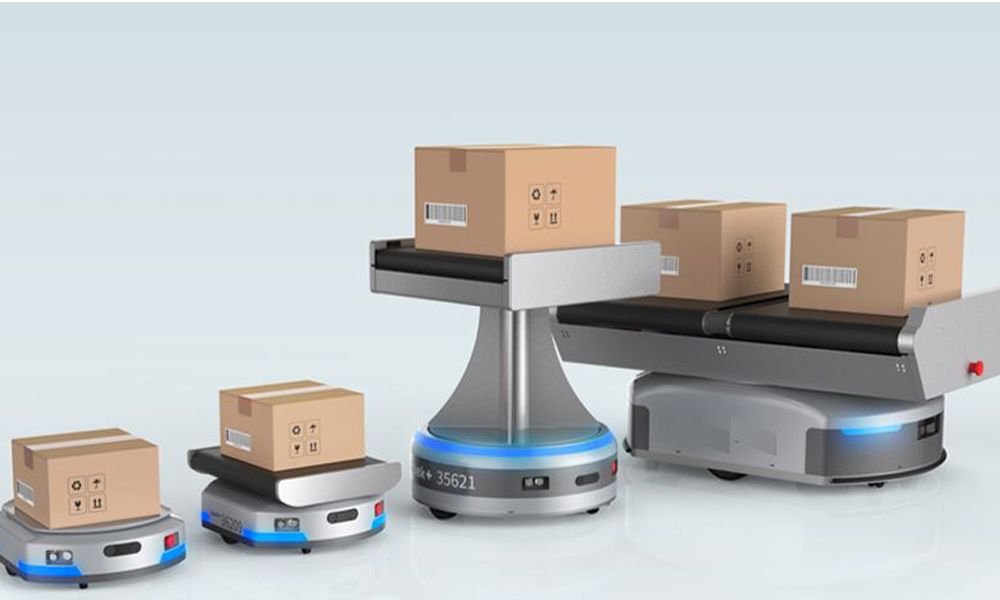 Types of autonomous mobile robots vary according to applications. The past few decades have brought monumental changes to the world of order fulfillment and material handling. From rising labor costs to a shrinking pool of qualified workers to increased pressure of next, same day, and two hour delivery—today’s order fulfillment operations have a lot of new challenges to conquer.

Embracing new technologies, processes, and procedures has always been an important piece of the puzzle for distribution operations, who must regularly modernize and adapt to remain competitive and profitable in this new reality. But with available technologies expanding as rapidly as they currently are, it can be difficult to know exactly which automation solutions make the most sense for your needs.

The field of warehouse robotics, especially, has a lot to offer when it comes to automation technology that can be used to increase productivity and efficiency. Though certain types of warehouse robots—such as AGVs, AS/RS, and others—have already been around for years, many warehouse managers are finding themselves wondering about a new entrant to the marketplace: Autonomous Mobile Robots, also known as AMRs.

What are Autonomous Mobile Robots (AMRs)?

Broadly speaking, an autonomous mobile robot (AMR) is any robot that can understand and move through its environment without being overseen directly by an operator or on a fixed predetermined path. AMRs have an array of sophisticated sensors that enable them to understand and interpret their environment, which helps them to perform their task in the most efficient manner and path possible, navigating around fixed obstructions (building, racks, work stations, etc.) and variable obstructions (such as people, lift trucks, and debris).

Though similar in many ways to automated guided vehicles (AGVs), AMRs differ in a number of important ways. The greatest of these differences is flexibility: AGVs must follow much more rigid, preset routes than AMRs. Autonomous mobile robots find the most efficient route to achieve each task, and are designed to work collaboratively with operators such as picking and sortation operations, whereas AGVs typically do not.

In a warehouse and distribution center environment, these sophisticated technologies are integrated with the warehouse’s control systems, which allow AMRs increased flexibility to create their own routes between locations within a warehouse or facility. The end result is a robot that is much better able to work with humans within the dynamic environment offered by most order fulfillment operations.

Autonomous mobile robots make processes and workflows more efficient and productive. This is typically achieved by performing non-value added tasks—such as transporting, picking up, and dropping off product—in order to free up laborers to perform other tasks that add value to the product/operation—like picking, checking, or packing an order.

Although they are still a relatively young technology, AMRs have already branched off into a number of distinct varieties, each of which is better suited to perform a specific type of action.

For this reason, when discussions about AMRs take place, they tend to be focused on the application that the technology is meant to perform, rather than a particular name or model.

Typically, AMRs can be split into three (3) broad buckets:

Below, we discuss the different types of AMRs available to perform each of these actions, in order to help you better understand which type might be able to help improve your operation.

AMRs that Transport Inventory and Product

Transporting inventory and product from one place to another within a facility is, typically, a low-skill task that adds little or no value to the product or operation. As such, it is often one of the first tasks to be automated when an operation decides it is warranted. Automating product transportation means that workers can stay in their primary work area in order to perform other, more valuable tasks while these types of work is brought to and taken away from them with AMRs.In the past, when an operation wanted to automate the transport of product within a facility, the main options available were forklifts, conveyor and AGVs. While effective, these options are typically labor, floor space, and capital-intensive.

Today, there are a range of AMRs specifically designed to fill the efficiency gap in functionality. Instead of working with only large and heavy loads, they are designed to pick up and drop off individual cases and totes and items.

Exactly how these types of systems operate will depend on the exact AMR model.

AMRs That Assist in Picking

Order picking is one of the costliest tasks performed within an operation—not because it requires a high level of training or skill (it can), but because it is extremely time-consuming. In fact, physically walking from location to location within a facility can account for up to 75% of the time associated with picking.

When it comes to complementing your pick operation with AMRs, you have many different options at your disposal. The most common include: