The VVA Group, part of Arvato Supply Chain Solutions, has modernized and expanded its distribution centre in Guetersloh during ongoing operations. An automated shuttle warehouse with order picking system has been built in the existing facility by long-time partner SSI Schäfer in a limited space, expanding the capacity in the area of immediately available item containers to a total of more than 60,000 spaces. At the same time, the new shuttle solution is a further step in the digital strategy with which Arvato is currently driving forward the automation of its worldwide locations.

The trigger for the capacity expansion was, on the one hand, the business growth of VVA (Vereinigte Verlagsauslieferung) in recent years. On the other hand, the business is characterized by a significant increase in picking intensity. As a partner and service provider, the company delivers media products from its three German locations in Guetersloh, Verl and Gilching to retailers and end consumers worldwide for more than 200 clients. In the central logistics centre in Guetersloh alone, about 70,000 different items are stored – in addition to books, CDs and DVDs, also magazines, calendars as well as stationery and toys. “With our existing system, which is already designed for very high performance, we have now reached the limits of our capacity,” explains Harald Horstmann, Vice President Publisher at Arvato Supply Chain Solutions. “We wanted to continue using the existing system and not invest in a completely new solution. That’s why we decided to modernize and expand together with SSI Schäfer.”

The intralogistics specialist, who had already installed the existing system in 2006, met the high requirements best. A storage and order-picking system for a throughput of 16 million articles per year was realized on an area of only 900 square meters. A highly dynamic modular shuttle system with approx. 40,000 bin locations was developed. The new shuttle warehouse is located in a 24-metre high extension directly next to the existing 60,000-pallet high-bay warehouse and is designed according to the patented 3D-Matrix Solution® from SSI Schäfer. By installing the workstations on the warehouse cube at a height of 16 meters, it was possible to realize an optimal use of space. A total of 84 SSI Flexi single-level shuttles ensure efficient storage and retrieval processes and 20 integrated lifts enable fast material flows on the vertical system level. By integrating the system into the warehouse cube, the number of lifts and thus the performance could be increased compared to conventional solutions. Each workstation has access to the entire article spectrum of the 3D-Matrix Solution® and thus enables a one-stop pick solution according to the latest ergonomic standards. In total, the new system expands the capacities in the area of automatically immediately available article containers to more than 60,000 places. At the same time, the number of goods-to-person picking stations is increased by 60 per cent.

A particular challenge was the system expansion during ongoing operation, which took place in three steps: First, the order start in the old system had to be relocated and further automated. In a second step, the direct conveyor connection of the fully automated high-bay warehouse to the existing and future storage and order-picking systems took place. The third and most important project step was the construction of the shuttle warehouse including the connected workstations. Business was not affected by the project work at any time.

The system has already passed its first test. Due to the special Corona situation and also numerous top titles in the Christmas business, the high demand for books at the end of last year led to the largest order volumes at VVA since the company was founded. In some cases, even the newly created capacities were completely utilized. Nevertheless, VVA was able to maintain the highest level of delivery reliability. If the trend continues, VVA will be able to expand flexibly thanks to the forward-looking, scalable solution,” confirms Stephan Schierke, President Publisher at Arvato Supply Chain Solutions.

Arvato Supply Chain Solutions placed particular emphasis on the ergonomics of the workstations. Together with SSI Schäfer and the start-up Cellumation, new types of workstations were developed in which, among other things, source and destination containers are served on one level. The new workstations in the shuttle warehouse are multifunctional and, in addition to order compilation, also enable the return sortation of returns. The workstations are also characterized by individually adjustable working heights, ergonomic arrangement of the operating elements, touch-friendly materials, optimal presentation of information and innovative lighting systems. 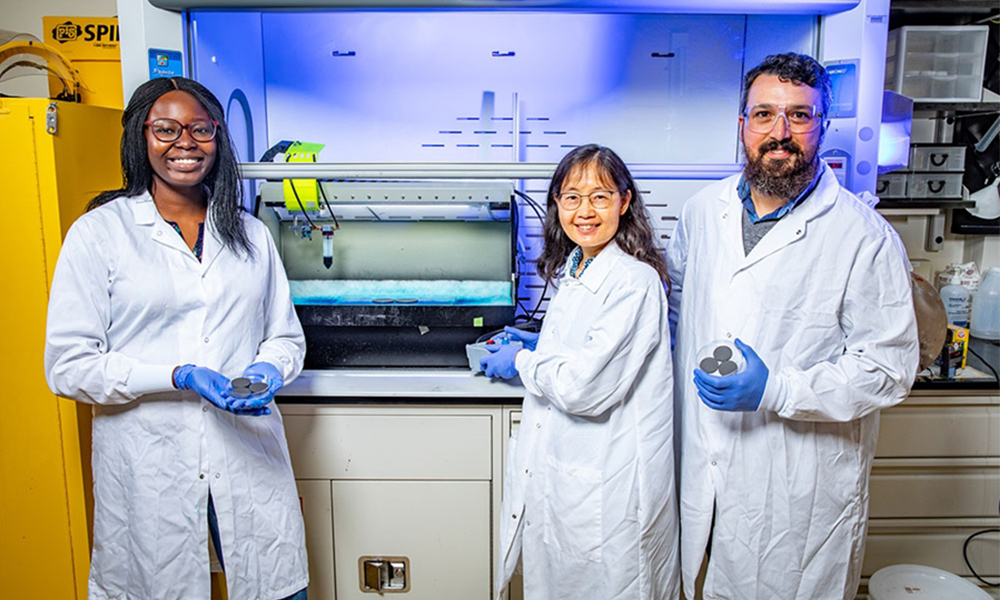 A research and development team led by Min Zou, professor of mechanical engineering and an Arkansas Research Alliance Fellow, has received a $550,000 grant from the National Science Foundation to develop low-friction, durable, graphite-lubricant coatings for industrial conveyor systems.

Belt conveyors comprise about a quarter of the $7.65 billion global conveyor market, which has expanded significantly in recent years because of e-commerce. However, an enormous amount of energy is wasted in these systems. High sliding friction between conveyor belts and slider bed materials is responsible for more than half of the total energy losses in a flat conveyor system.

The researchers will develop novel graphite coatings that will significantly reduce energy consumption and equipment failure in conveyor systems. The research will also deepen a fundamental understanding of the novel coating technology to enable applications in other fields, which could lead to significant savings in many U.S. industries.

The technology is based on a unique, patented bonding approach, developed by Zou’s group, in which graphite coatings adhere tightly to a substrate material.

After developing and optimizing fast-coating deposition processes for conveyor materials, the researchers will build scalable coating processes for full-sized belt conveyors. They will then build a prototype for evaluating the coating performance and demonstrate the feasibility of the coatings for industrial applications.

The new project is a collaboration between university researchers and industry leaders. Zou’s team at the U of A will partner with researchers at Arkansas State University and Hytrol Conveyor Company Inc., the largest conveyor manufacturer in the U.S. 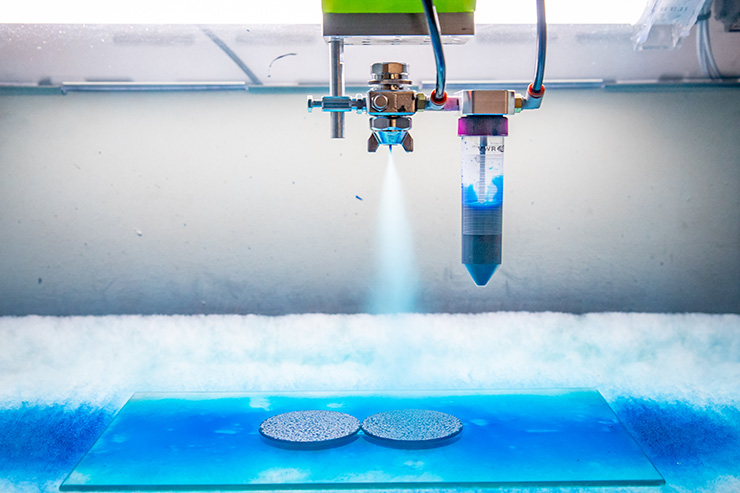 The researchers use a special machine to apply novel graphite coatings that will reduce energy consumption and equipment failure in conveyor systems.

The project will support a doctoral student at the U of A, who will serve as the entrepreneurial lead, a master’s student at Arkansas State, and undergraduate students from underrepresented groups. They have benefited from site and national NSF I-Corps training and Office of Entrepreneurship and Innovation support and training, as well as mentoring by Cynthia Sides, assistant vice chancellor for research and innovation at the U of A, and Douglas Hutchings, director of the Arkansas Research Alliance Academy.

Zou’s research focuses on nanoscale materials and manufacturing. She is an international expert on surface engineering and tribology — the study of friction, wear and lubrication in the design of bearings and interacting surfaces in motion. Zou has designed, refined and tested solid lubricant coatings for various applications. The coatings are thinner, more durable and environmentally superior to petroleum-based oil lubricants. 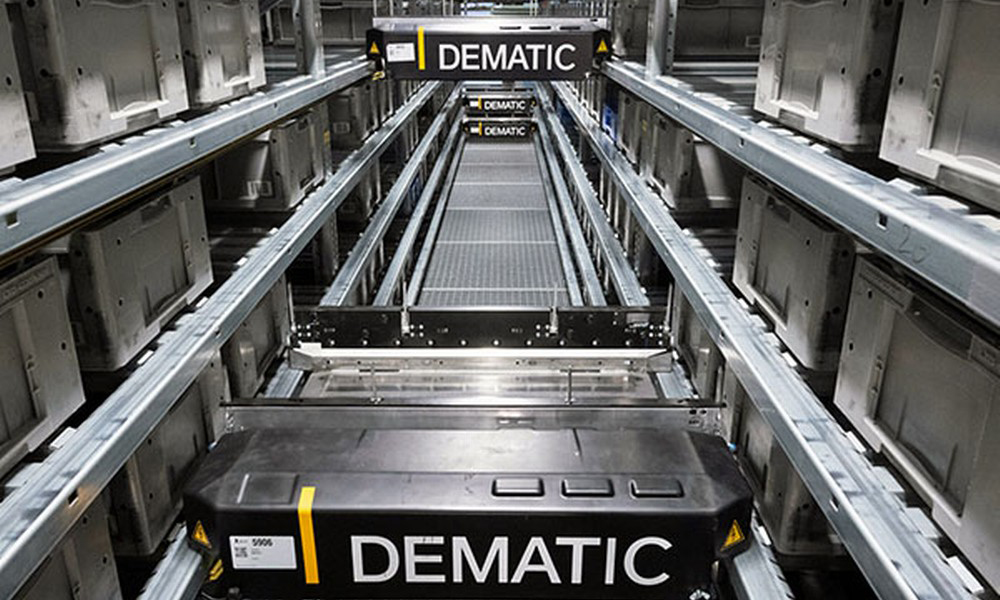 Dematic has automated the picking warehouse of French kitchen manufacturer Schmidt Groupe S.A.S. at its site in Lièpvre in Alsace. The automation technology provider developed a space-saving solution, featuring a multishuttle system for multiple-deep storage in nearly 6,000 locations as well as special tote conveyor technology. Within the multishuttle system, 12 shuttles control order sequencing. The conveyor system z requested items to various workstations. In this way, the Dematic solution provides complete automation of the previously manual storage and retrieval operation as well as picking goods for the entire material flow.

“The Dematic Multishuttle significantly increases speed, storage density, accuracy, and availability within the picking warehouse,” says Boris Herrmann, Process Manager at Schmidt Groupe S.A.S. “In addition, the overall system enables high throughput rates as well as error-free picking, guaranteeing us efficient and reliable order processing.” As one of the international market leaders for furniture manufacturing and distribution, Schmidt Groupe faced several intralogistics challenges. For example, managing the side panels, doors, fittings, and handles of a customized kitchen required more effective processes, so the company decided to automate the material flow at its Alsace site.

Order picking starts at the small parts workstations. There, operators put required parts into cartons using a pick-by-light system. Cartons are then transported to the subsequent stations by conveyor using special roller and belt conveyor technology that support the logistical processes. If larger items are needed for an order, the small parts carton is loaded onto a tray and stored or buffered in the Dematic Multishuttle, which provides space for 5,760 storage locations on 12 levels. Within the multishuttle system, a dozen shuttles handle automatic order sequencing as well as storage, transfer, and retrieval. The conveyor system then transports the filled totes and trays to the other workstations. A continuous scale checks the weight. When an order is complete, the sequenced totes are checked, cartons are closed, and shipping labels applied.

Dematic has also installed a WMS (Warehouse Management System) that optimally manages stocks and orders according to priority, with the most frequently requested items stored in the most accessible locations. A WinCC process visualization system developed by Siemens was also integrated into the solution for monitoring the technical processes. It enables a simple and clear information flow of all accruing data and provides a user interface. As Thomas Meyer-Jander, Director EMEA and Head of Marketing & Communications at Dematic, explains: “In this way, users have access to the current operation status and can use that data to derive optimizations for improved performance.” The Schmidt Groupe’s assessment is correspondingly positive. Herrmann sums it up, “Our throughput and delivery accuracy goals have been more than met. With Dematic, we have the right supplier – due to their intralogistics know-how and expertise, they have been valuable resource, and our relationship has been characterized by cooperation and partnership.”

Orion Packaging Systems, a division of ProMach, responded to industry demands by creating a space-saving rotary automatic wrapper that easily integrates with new or existing conveyance.

Orion’s Rotary Tower Automatic (RTC) Stretch Wrapper with Conveyance is the ideal solution for easy integration with 18″ pass-height conveyors due to its compact size, affordability, and the option to expand with additional conveyance.

The RTC is fully automatic and attaches the stretch film at the cycle start, cutting it at the end. The forklift operator simply places the pallet-load on the infeed conveyor and pulls a lanyard switch while moving away to collect the next load. This design increases employee safety by removing them from proximity of the moving rotary arm.

In addition to the compact size, expandability and increased employee safety, the RTC has: